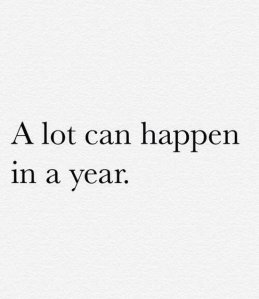 It has been a year since my last miscarriage, tests from Tommys keep being pushed back every few months, in this time I have kept hoping that we will find the problem but after a year it’s being to feel hopeless.

I’m another year older than I was, another year with terrible mental health, and I honestly feel that I have achieved nothing. That’s not true, however, so I thought I’d list my achievements none the less.

Last year this seemed impossible, I spent the majority of my time indoors, and it seemed as though I would never be able to socialise with anyone. Thankfully my friend understands the toll mental health can bring and understands my limitations while trying to support me on the days which I can’t face anything.

Again something that seemed impossible last year, I’m not saying it has all been smooth sailing, but having a support network around me has made impossible situations possible. I have been places that I have not wished to go but instead of bailing out at the last second and hiding under the covers (which I have only done once) I have gone.

As someone who panics when surrounded by people this was one of my biggest achievements this year, it never occurred to me until I was almost off the bus that the last time I travelled alone was almost five years ago. Being packed into a busy bus seemed like a nightmare last year but this year I managed it.

Moving House is one of the most stressful things a person can do, I have moved from a village to a town, a house to a flat, and manage to live on a busy road without any impact onto my mental health. I have decorated, unpacked (mostly), and moved around without much fuss. I don’t need to travel for local amenities either and I made sure to paint with calming colours.

Anxiety makes this rather hard as I am always ragging on myself to find a job, to do something important, to stop being weak. It felt impossible to stop blaming myself for every bad situation, I’m not saying that I have got there yet but I have learned to be nicer to myself, and I have tried to look at myself in a different light.

If I know that I am going to have a bad week I will communicate it to the people around me, I understand that sometimes I am not going to be able to please everyone by the way I have been acting and that is ok. I came to the understanding that I have to look after myself when I am having a hard time.

If I am being forced to take part in something I don’t want, if I have made my feelings clear and it’s still not good enough I will say no. This is a huge stride for someone who is constantly putting other people’s feelings above themselves, I can care for others and put my feelings above everyone else.

A toxic individual who ruined my life a few years back, I thought that she had completely changed her ways but it turned out she was still the biggest liar I’d ever met. She found out my story of nearly dying during my second miscarriage and made it her own, by making it her child’s birth story, some people are too far gone.

Looking back it feels as though I can achieve anything, it makes me hopeful towards the year that is to come, who knows this time next year we could do anything.

Thanks so much for reading,